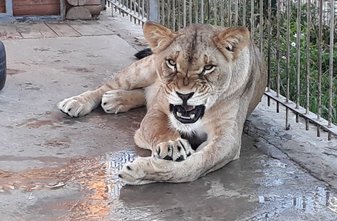 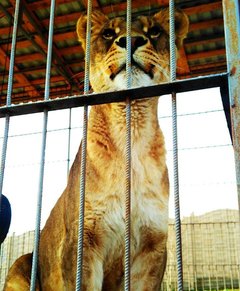 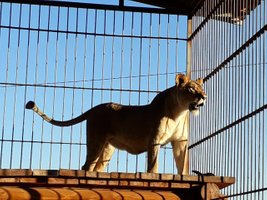 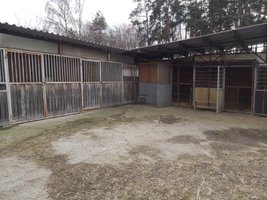 Demira was born in Ukraine. As a cub she was given to a priest as a gift, he then presented her to a monastory where she lived with the nuns. Well not with them, but in a cage of approximately 30m2 made of iron bars for walls and roof and a concrete floor.

She did have some climbing aparatice and could move freely within the small, but clean space, which is a lot more than other captive lions get.

There came a time when Demira (then called Asya) was eating more food than the nuns could consistantly provide for her and they contacted The Lawrence Anthony Earth Organization (LAEO Ukraine) who in turn sought a South African Sanctuary that would be willing and able to give Demira lifelong loving care.

Demira stayed temporarily in Borispol, Kyev cared for by Nathalie Poprova whilst LAEO and LLA raised the funds, organised permits and LLA built enclosures for the lions.

We collected Demira from Poprova Nathalie and moved her to South Africa in Feb 2020. She now lives on the mountainside free to walk, sleep, climb, sharpen her claws, drink, play and snuggle with her two new lion mates Diya and Frida (also rescued from Ukraine).

Demira is strong, elegent, svelte and in charge of her space. An absolutely beautiful lioness.