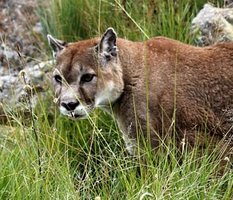 In March 2020 the SPCA decided enough was enough and they forced the Bloemfontein zoo to permanantly close. They had tried to obtain a different outcome by trying to make the zoo change their management and care of the animals for the better. Unfortunately any change they created, was not upheld and animals began dying.

Cleo was one of many animals confiscated and rehomed.

LLA was contacted days before the confiscation and asked to take 2 pumas and 2 jaguars. We had from Thursday night to Monday morning to come up with a plan. We adapted 2 vacant lion enlcosures by raising the height by 1m and adding 3 more electric strands to the apron. We borrowed crates from Lion's Rock (Four Paws) and employed our veterinarian Dr Peter Caldwell on the Monday morning when the SPCA went in with bolt cutters to get to the animals. The DESTEA was there to issue the necessary permits.

Dr Caldwell felt that having seen Cleo and heard the report from the zoo keeper, that Cleo was too ill to be sedated. Her breathing was raspy and difficult.

It took patience, but eventually we loaded Cleo by enticing her into the travel crate. Hieldegard from Lion's Rock took the lead in this mission.

The trip back to LLA (4hour drive) was done in torential rains and we decided to get Dr Caldwell to come and check Cleo the follwoign day. He did not sedate but performed a visual check, all was fine. She is quite a confident cat, not afraid of us.

She takes her food easily and moves around well.

We built her a species specific enclosure on the mountain side with views, lots of privacy, rocks to climb on and long grass to hide in. It has cost us a lot financially but we are already in love with Cleo. The thing is, mountain lions should not be in captivity. They should not even be in South Africa. They deserve much more than we can ever give them in captivity.

We employed Dr Caldwell to do the move from the temporary enclosure into the new one at which time he did her vaccnations, medical checks and administer treatment. She was already improved enough to be sedated for this. We give Cleo meds and supplements every day following a long term plan to improve her health.

She is graceful, proud and dignified.

This old girl deserves to live life with a view and not only a wall enclosing her. She gets to not be gawked at by hundreds of loud zoo going people looking down into her enclosure. She will no longer be bred over and over with her cubs just being taken away from her. She will never be hungry again.