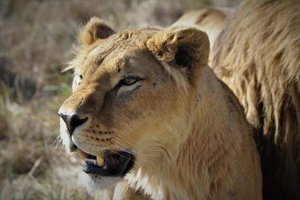 Serindipity was at play the day Joy was named. She is a special kind of lioness this bundle of joy, she is delightful, energetic, confident and at ease with herself and her environment.

Before Joy became, well, joyful, she was called Bagira and she lived in a cage in a zoo in Ukraine. She and her brother Xanda (then Vitold), were kept captive for the pleasure of zoo goers who needed, we are told, to experience an African lion first hand.

Well we do not agree with that notion, it is nobody's right to see a live animal for one hour of that person's life while that animal spends it's entire life in that prison for that persons momentary experience. If you want to see a bear hunting salmon, go to Alaska, if you want to see wolves running through a forest, or elephants crossing the savannah, if you want to see leopard leaping into a thorn tree or emperor penguins slidding into the sea...we applaud your desire, but you do have to go to the wild places that those animals live. Do not put animals in zoos!

Joy and her brother Xanda are now in sanctuary at LLA where we have built them a natural enclosure with rocks, bushes, veld, views and open vistas. They are improving everyday both physically and mentally.

Thank you to all the people who helped to get Joy out of her prison environment and to sanctuary. It was a massive group effort with push-me-pull-me co-operation between diverse people and organisations... but we did it.