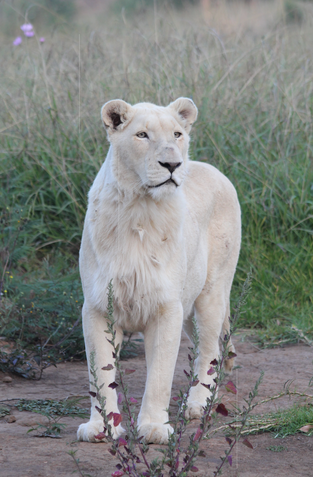 Lives with: Reign and Shannon

On the morning of 10 December 2011 Elias came running into the garage where Taiga and Andi were busy making a head board, he was yelling and it took a moment to understand that two lions had had a fight and that the pregnant female was badly wounded, had given birth to one cub and according to Elias, was dying.

They ran up to the camp, the farm owner was parked inside the enclosure. It took a few minutes to see the cub as it was tiny and white and was lying amongst a scattering of small dead white chickens which had been thrown in as lion food.

The wounded lioness was lying about 10m away, flat on her side, heaving and breathing heavily with blood gushing from a neck wound. She raised herself to a standing position and gave birth to a second tiny cub before collapsing, the cub  in the amniotic sack with cord still attached to the mother.

The owner of the farm told Andi that she could have the cubs if she would look after them and stay and look after him and his farm.

Taiga and Andi decided they would stay and look after the cubs, the farm and the owner.

However it turned out that the parents of the cubs (Pinkie and Shanti) belonged to a breeder down the road. Luckily for them, when the farm owner phoned her and told her that her lioness was dying because of a fight. Andi could hear the breeder shouting at the farmer saying it was his fault for letting a male (Rex) into the enclosure and that he must now take ownership of the two lionesses in that enclosure and give her two of his instead. She told him that the cubs wouldn’t survive as they were too premature.

Elias had walked into the enclosure and he picked up the two cubs and handed them through the fence to Taiga and Andi. Taiga had Tindra the first born and Andi had Sienna who Andi began suction and resuscitation on as she was not breathing and had mucous in lungs and air passages.

They walked to the house discussing what they should do. They decided to get wet clothes and to simulate licking them as their mother would have done. They were a few weeks premature so incredibly small.

Andi phoned Pretoria University, the zoo and a vet and spoke to various doctors about feeding and caring for cubs as these were the first two Andi had ever seen. Whilst doing so, Andi treated them as she would have treated newborn humans. The owner of the farm went to get a container of formula from the breeder down the road and Andi's sister in Johannesburg went to buy a bag of formula at a vet which she brought down to us on the weekend.

They named them Tindra (after Andi's brother’s daughter) and Sir Nicholas as Elias told us that they were a female and a male. Later when they discovered that Sir Nicholas was a girl they named her Sienna. They wanted her name to begin with an S as she and the 3 other cubs which were born that day were initialled S T A R and S and called the Stars Pride.

That night was insufferably long as Andi drip fed them from a syringe and they screamed, only one of them would sleep at any given moment. Andi's children and her mother helped with feeding after that night but only Andi could ‘poo’ them.

Sienna was always difficult to feed and she sucked incredibly slowly. She scratched them more than the other cubs whilst suckling and she stayed on a bottle and would not eat from a bowl for weeks longer than the others.

Sienna is squint and has a lopsided face and quizzical expression, this is due to inbreeding. She lived with the Shannon, Reign, Aslan, her sister, Fonda and Tamarind. She was always the lowest ranking in the pride’s hierarchy and never very loving.

When Andi left to set up LLA, Sienna was put with a male to breed but as far as Andi has heard, Sienna's cubs died. She is now on contraception and lives with Reign and Shannon. 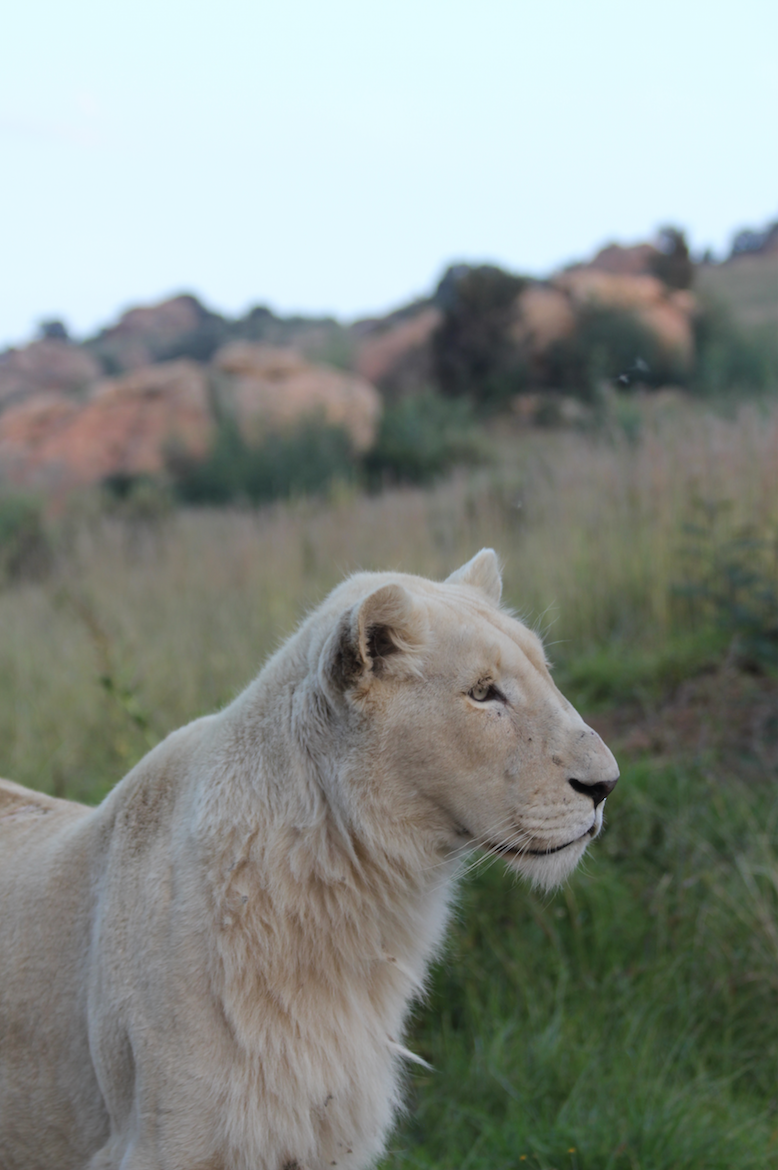 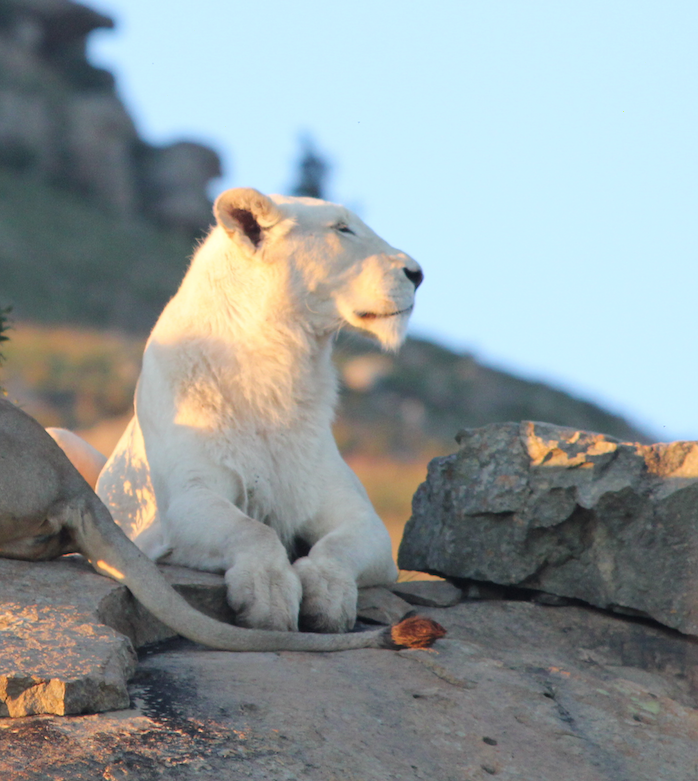 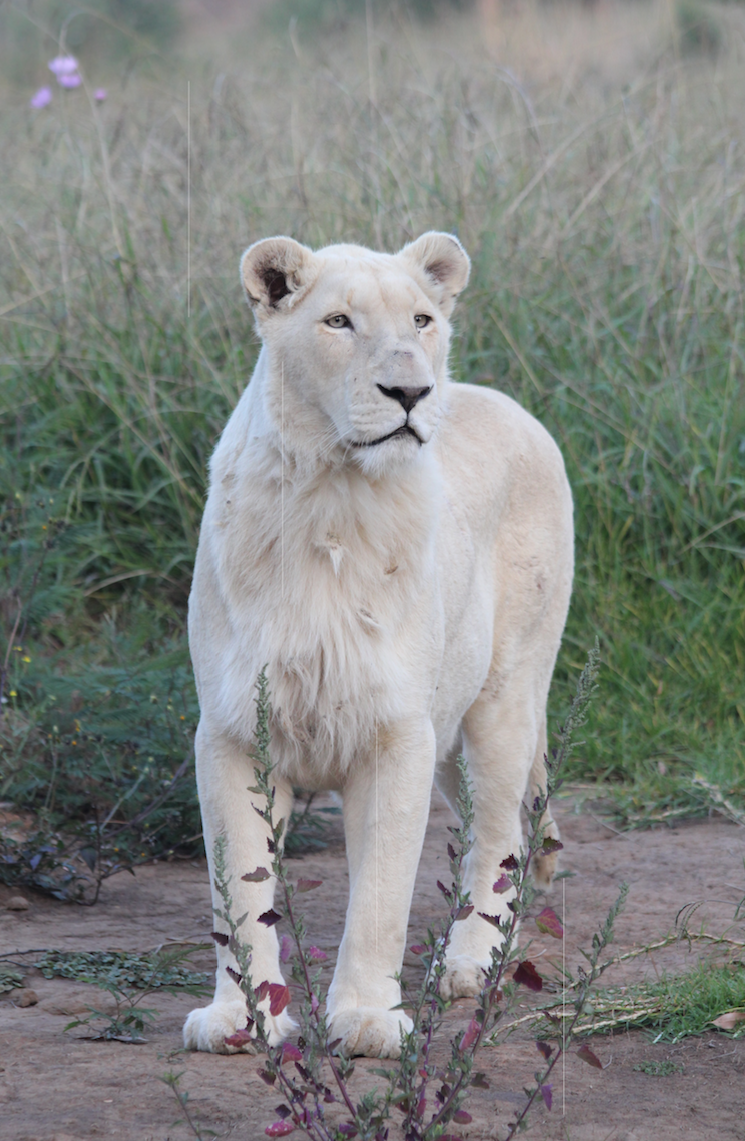