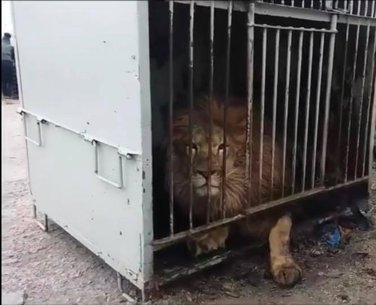 by Lexi in honour of Eugene vd Merwe

Luke was born in Ukraine, we do not know much about his life as a cub but we do know that he was trained to perfom in a lion act in a circus. He travelled in and out of Ukraine with this circus, living in a small travel cage.

One day Luke put his foot down (or most likely two feet, claws extended, digging and raking violently at the ground, growling) and said No to his trainer. Thus he was placed in a 1.5mx1.5m box and left in it.

When the Lawrenve Anthony Earth Organization (Ukraine) became involved, he was still standing inside this box, the box was now part of a Home Zoo exhibition in a town called Povkrovsk owned by a man named Igor Palolski. Luke stood inside that box in sun, rain, snow, day and night.

Many animal activists brought the existance of the animals in this Povrovsk zoo and the terrible conditions in which they lived, to the attention of the world. Lionel De Lange of Lawrence Anthony Earth Org raised his voice and worked at getting the Ukrainina governemnet to confiscate the lions and bears from Igor Palolski.

Oleksander Pylyshenko, a man who also owns a Home Zoo, went in and forcibly removed the lions and bears from Palolski and took them to his own zoo where he cared for them until LAEO could move the bears and LLA could arrange permits and build enclosures to house the lions in SA.Unfortunately at the time that we were able to collect Luke, the other 3 Povrovsk zoo lions (now named Cecil, Xanda and Joy) were still not permitted to be removed from the ownership of Palolski permanantly,and so we had to leave them behind. (which was heartbreaking)

Luke travelled to LLA with the 3 lionesses Diya, Frida and Demira. He now lives at LLA where he can drink when he wants to, stretch out in the sun when he wants warmth, sleep in the shade when he chooses, walk, run, climb, roll on his back to scratch and itch, rub against bushes and trees and do any of these things when ever he wishes to do them.

He is beautiful, gentle and powerful. 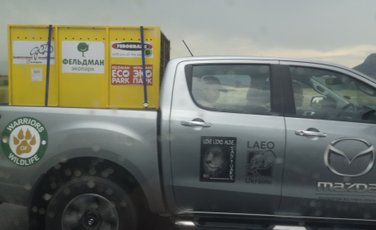 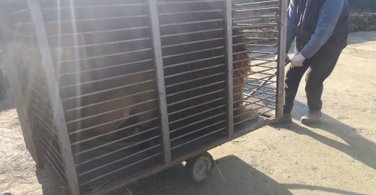