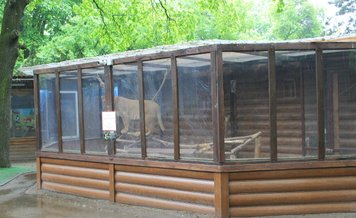 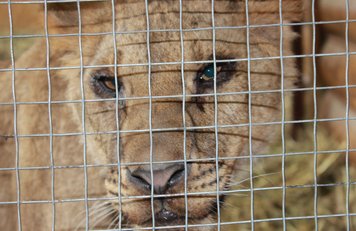 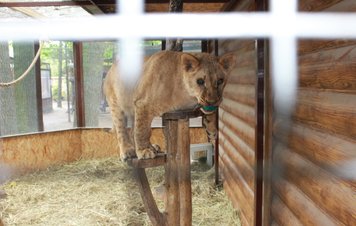 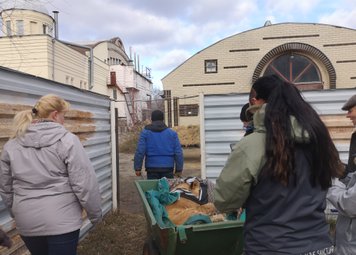 Frieda was born in captivity in Ukraine, she was at first owned by a private individual as that person's pet. She was kept in an appartment and used to drive with the person in his or her car.

At a point (which happens with every large predator pet), the owner could no longer deal with a lion as a pet and Frieda was sent to an animal park where she became an exhibit, kept in a perspex exhibition box. The box was not very small, giving her about 30m2 to walk up and down in, but it provided no airflow.

The Limas next door to her had their sleeping area above her sleeping area and their urine would trickle through to her. As a consequence of insufficient fresh air and the dirty straw she slept in, Frieda developed

conjunctivitis which made her aesthetically unpleasing for the viewers so when Lionel de Lange of the Lawrence Anthony Earth Organization appealed for her release, the animal park gave her to him and he gave her into sanctuary at LLA.

She stayed temporarily at a holding facility where she was introduced to Diya and then due to medical issues, she was moved to Borispol, Kyev so she could be near to a vet. This meant she and Diya undertook the trip to Borispol earlier than they would have done if only travelling there to fly to South Africa. They stayed at Nathaliia Popova whilst waiting for LAEO and LLA to be ready with travel crates, permits and enclosures in SA.

She now lives with Diya and Demira at LLA where she revels in her ability to climb boulders and run through the veld.

She is on chronic medication for thickening of the skull, a devistating condition caused by lack of proper nutrition. She still shows signs of nurological symptoms, and will need to have further blood tests and perhaps a skull x-ray done in the near future.