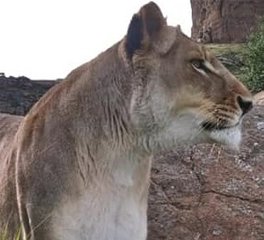 Phuku is our own sweet girl who has had rather a mixture of a life so far.

She has had much love from Yolandie who raised her from a cub, but also been around & seen disinterest and in fact, absolutely horrific treatment.

Phuku was a sickly cub who would not take food for the first few days. She was born in captivity and could have been lost in the business of cub petting, breeding and culling, except that Yolandie took over Phuku's ownership and financial care.

Yolandie does not have her own farm or sanctuary so she had to move Phuku around in an attempt to find her places to stay. She always tried to find work near to Phuku so as to be able to visit her frequently. As a result of Phuku being housed at various lion facilities, she has had a variety of 'camp mates'. She is a little bit defensive because of this.

At the last place Phuku was at, poachers broke in and poisoned the other lions. They hacked off the lions' faces and paws. Phuku witnessed this. She was extremely fortunate in that the male she was with was not poisoned and his ability to attack the poachers if they came into their enclosure, meant the poachers couldn't reach Phuku. Yolandie phoned LLA urgently after the first poaching and masacre, but it took 6 weeks for the Government to process our urgent permit application to move her to the safety of LLA. During the waiting period (which seemed exhorbatantly long), the poachers returned twice to try and get Phuku and the male.

Phuku has hip displazier, hind leg parasis, night blindness and she was obese when she arrived here. We have her on a long term treatment plan to help with the physical aspects that cen be improved.

We have seen a huge improvement both physically and emotionally. Where as she could not properly handle her piece of meat at first, tackeling it with teeth only, not using her paws or going down onto her sternum, she now crouches, rips and tears into it.

Yolandie had, had her spayed so we have not needed to attend to that. (All lionesses at LLA are spayed as we are 100% against the creation of more lions in captivity).

Phuku is a very curious cat, she loves to see what's goign on around her. She is quite confident, especially for a lion with physical weaknesses. She roars a great deal.

We were sorry that she was on her own here and wondered if there might be a suitable lioness for her to live with once she had settled in and gained a bit of strength, lost weight and regained mobility. We were wondering if she would ever be able to live with Mela and Carl. And then Luke arrived from Ukraine. Phuku lived in the camp alongside of Luke. She was extremely interested in him and lay at his fence line watching intently for weeks.

When Yolandie visited, she told us she thought Phuku really wanted to be with Luke. We took awhile to agree. But Yolandie knows Phuku better than us and we ended up seeing that she was right.

When a lion comes to LLA, that cat is no longer privately 'owned' by anyone. Yolandie had to give up 'ownership' and Phuku is under the custodianship of LLA Sanctuary NPC. We do not believe in private ownership, all our animals will remain in the care of LLA even if something were to happen to any one of the Directors, Founders etc. We do not have to answer to nor report to any previous owner or person who has been part of the rescue or rellocation of an animal to LLA. We do send updates as a courtacy, but not as an obligation. LLA decides on how to care for the animals to the best of that animals specific needs. We are entrusted by the previous owner, rescue group, department etc and we live up to the duty we have taken on, in perpetuity.

We took Yolandie's opinion into account but watched and waited until we too felt that it would be the best thing fo rthe two lions if we allowed Phuku and Luke to live together.

Both of them were physiaclly compromised and both had difficulty walking and neither could leap or rise up on their hind legs. So they were a good fit in that neither could really hurt the other one too much with boisterous jumps and gregarious mock hunting.

The day arrived when we opened Phuku's gate into the maangement area between the two enclosures and she slowly walked through. She went to the gate leading into Luke's camp. We opened it when we saw that Luke was in know way showing any inclanation towards heading out but Phuku on the other hand was waiting to go in.

Luke was watching her from about 50m away.

Phuku trotted in, we slid the gate closed, she did not look at Luke (who she had been, it had seemed, looking at for weeks), instead, she ran straight to his shelter and rolled around in his hay. We realised that it had not been him she had been longingly gazing at, but his house which was behind him.

She laid claim to his house (which he had not gone into as yet), and then set off for a walk around to explore his enclosure. He watched and followed from about 20m behind her. She growled at him every now and then, but all within normal social boundaries, not agressively. After 40 mins, they greeted. Over the course of the next few weeks, they became more and more relaxed with each other and now they are always to be seen within a meter or 3 from each other.

We are very happy with Phuku's progress and it fill our hearts with joy when she runs in leaps and bounds alongside of the fence when the food truck drives up the road.