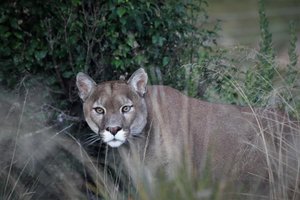 At the Bloemfontein zoo, when we went in with the SPCA, DESTEA, Four Paws, Panthera Africa and Dr Caldwell to get the confiscated animals out, this cat showed what he was made of.

Dr Caldwell had to sedate him several times as he just kept on rising up from sleep. Hence his name, Phoenix.

Phoenix although head strong, is a very shy cat. It took 8 days for him tho relax enough to show himself. He moves like a ghost, suddenly being in front of you when a split second before he had not been there. He has taken to lying in a fold of rock up on his boudler, he fits into this little spot perfectly. He appears to find comfort in this nook as his back is protected, he has a good outlook over the sanctuary and he can hardly be seen as he is so camouflaged there.

Phoenix came to LLA with his mother Cleo. To read a bit about their story, please look at Cleo's profile page.

This magical cat should be out in the mountains of the Americas and not ever have been inside a walled zoo exhibit in the city of Bloemfontein. We have now built Cleo and Phoenix the best enclosure that we can give them for now (obviously with time and money we can enlarge it). We have designed it with him in mind so it is largely private, has two rocky outcrops, bush and long veld. He can be as ghostly as he likes in here, in fact, unless we are feeding him, we find it very difficult to spot him as he disappears into his new natural environment.