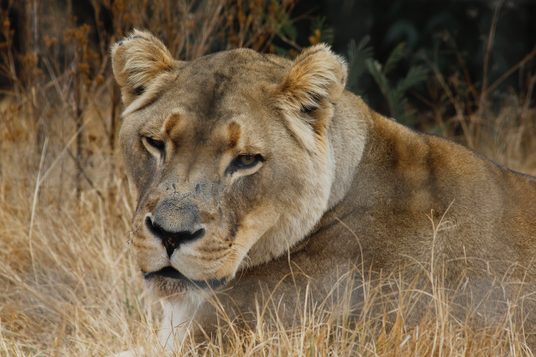 Our beautiful Emma has died.

We are eternally grateful to have had the privilege of being a part of this magestic lion's life. We will miss her every day for the rest of our lives

RIP Queen of all Lions

May your roars resound across the heavens

Em Bem is our queen. There is no bigger character or more dignified lion in the world. Ok, we don't know all the lions in the world, but we are still probably right about this.

She roars more than any other lion at LLA, if you visit you will hear that hers accounts for 90% of all roaring at LLA. She is dignified and strong. She is not beautiful, not nubile and no longer svelte. But she is awesome.

Emma came to LLA from the Pretoria zoo. She first came into LLA for sanctuary in 2014 but a very unfortunate incident kept her from moving with LLA to the current premises for 2 years, during which time, we had to fight to make sure the owner of the farm she was on did not put her down owing to her being genetically compromised. He, being a stud breeder, saw that she was not pure. In actual fact, she would never have bred for him anyway and would have attacked any mere male he tried to put with her. She is an hermaphrodite. She has both male and female characteristics. Clasified as female, Emma had internal testes instead of overies. The zoo vets removed her testes. She is really large for a female and super dominant. Emma was researched and consequently spent much time in the hospital section of the zoo where, due to stress, she chewed off the end of her tail.

Emma came here with her partner Amber. Amber's story is a long one of her own and we will add it to her own page. Amber died as is safely burried in a grave on the side of the mountain.

Em Bem has bad teeth owing to her age, we had to get a dentist in who performed a root canal treatment and did an extraction. We feed her easy to chew meat.